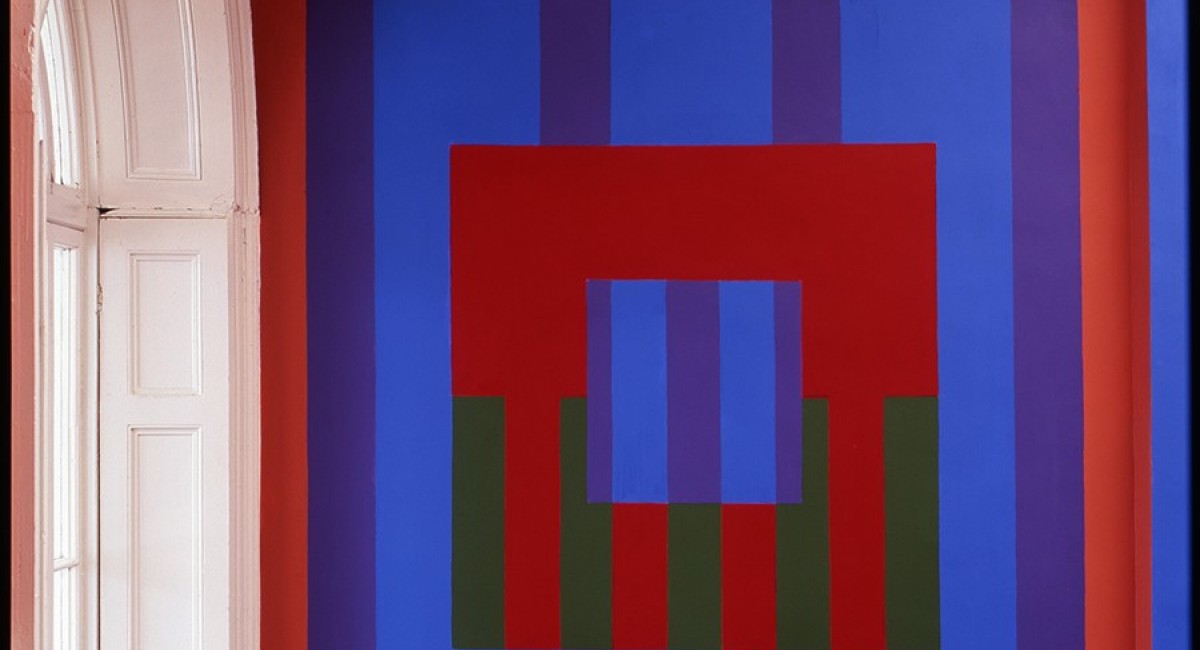 read more about the project

ABOUT ONE HERE NOW: THE BRIAN O’DOHERTY / PATRICK IRELAND PROJECT

In the stunning light-filled centre gallery of Sirius Arts Centre in Cobh, County Cork, behind two layers of liner paper and twenty years of white emulsion, lay, until very recently, a very well-kept secret. One, Here, Now is a nine-part series of spectacular, floor-to-ceiling wall paintings by the eminent New York-based Irish artist Brian O’Doherty (formerly known as Patrick Ireland), that were made over twenty years ago and subsequently covered up and almost forgotten about, until now.

Recently restored by Conservator Don Knox, Sirius Arts Centre, led by Director Miranda Driscoll, has launched an ambitious project that will once again display these wonderful murals for the public to visit. The project will be marked by a year-long series of new partnerships, specially commissioned artworks, music compositions, performances and talks to celebrate, re-interrogate and most importantly, preserve these important Irish works for future generations.

The original installation in Cobh, facilitated and curated by Peter Murray; founder of Sirius Arts Centre and former Director of the Crawford Gallery was, in 1996, a seminal moment for Irish art. The project came out of a residency that Patrick Ireland, as Brian O’Doherty was known  then, undertook at Sirius Arts Centre in 1995-96. The murals, which comprise of abstract paintings based on Ogham (an early Celtic written language), demonstrate some of Ireland’s/O’Doherty’s key concerns  throughout his sixty-year career; namely those of Irish language, identity and perception. The work was on show for  almost two years before being covered up. This important work is one of only two permanent O’Doherty public wall paintings still in existence in the world. This ambitious restoration project proposes to renew and celebrate this historic artwork in what is arguably one of Ireland’s most historically significant coastal towns.

The project marks over fifty years of O’Doherty’s interest in the ancient Irish Ogham alphabet. It pays tribute to the Irish language and it monumentalises the Irish heritage, over one hundred years after the proclamation of the Republic. O’Doherty’s use of the Ogham alphabet in this work had and still has, important  political and cultural significance. In the accompanying catalogue essay for the work in 1995/6, Alexander Alberro states that the murals and the Ogham writings convey a complex historical narrative that is “one of  sorrow and oppression, and once its layers of complex codes are understood, the series of paintings take on the status of a memorial to those who were forced to leave Ireland, as well  as an act of resistance against the legacy of what has been described as the ‘age of empire’.”[1]

The project also coincides with Brian O’Doherty’s 90th birthday and the 30th anniversary of the opening of the Sirius Arts Centre. It proposes to renew this outstanding work of Brian O’Doherty in a seemingly hidden, but magnificent setting on the sea, and on the edge of Europe. Commissioned projects and partnerships throughout the year will include, among others, works by visual artists Brendan Earley, Ailbhe Ní Bhriain, Dan Graham, Mary-Ruth Walsh, Karl Burke, Kevin Atherton and Sarah Hayden, compositions by Ann Cleare and Peter Broderick, and two new dance works by the internationally renowned Liz Roche Company in collaboration with composer Linda Buckley for Sirius Arts Centre and the Cork Opera House. Events with our partners will take place at the Crawford Art Gallery, CIT Crawford College of Art & Design and associated events will take place at the Glucksman UCC and the Everyman Theatre, Cork.

The project is kindly supported by the Department of Culture Heritage and the Gaeltacht, the Arts Council, the Cork County Council, Colourtrend, the Port of Cork, Ronan Daly Jermyn, O’Leary Insurances, Irish Examiner and Tower Holdings Group.

The Project Patron is Michael D. Higgins, President of Ireland.

Sirius Arts Centre is housed in the former Royal Cork Yacht Club in Cobh; a pretty port town that was once the departure point for generations of Irish émigrés - a garrison town in Cork harbour that was  surrounded by British forts. Cobh, a small town which lies on Great Island - accessible by bridge and by boat, seems an off the beaten track site for such a significant Irish artwork. But such is the  beauty of the proposed project – which will invite visitors to make the pilgrimage to East Cork, and onto Great Island, much like the journey their predecessors took before emigrating  from Ireland for good. Not unlike O’Doherty himself in 1957, who left from Cobh for the U.S.

Brian O’Doherty (known as Patrick Ireland from 1972 – 2008), is undoubtedly one of Ireland’s most important living artists. He left Ireland in 1957 and became known internationally as one of the pioneering figures in the conceptual art movement in 1960’s New York through a multi-faceted practice as a visual artist, writer, critic and novelist. O’Doherty has produced many seminal works including the Portrait of Marcel Duchamp (1966-7) and an early exhibition in a box, Aspen 5+6 (1967), which included works by Samuel Beckett Roland Barthes, Susan Sontag and John Cage. O’Doherty is also well-known for his seminal text - Inside the White Cube. He was a director of the National Endowment of the Arts in the U.S. where he was responsible for two major public television series - American Masters and Great Performances. His name is synonymous with Marcel Duchamp, Marc Chagall, Joseph Albers and Edward Hopper among others.

In 1972 Brian O’Doherty changed his artist name to Patrick Ireland in protest at the killings of civil rights marchers in Derry, Northern Ireland. After the Good Friday Agreement Patrick Ireland was buried in a ceremony celebrating peace at the Irish Museum of Modern Art, Dublin, in 2008. For thirty-six years Patrick Ireland exhibited throughout the United States and Europe a unique series of installations called Rope Drawings.

Associated Projects at Lewis Glucksman Gallery, and the Everyman Theatre.

The project is kindly supported by the Department of Culture Heritage and the Gaeltacht, the Arts Council, the Cork County Council, Colourtrend, the Port of Cork, Ronan Daly Jermyn, O’Leary Insurances, Irish Examiner and Tower Holdings Group.

We are still fundraising for this project and your support towards this ambitious project would be greatly appreciated. To do so please click on the GOFUNDME link, every cent will go towards the restoration of this great artwork and it's associated programme.