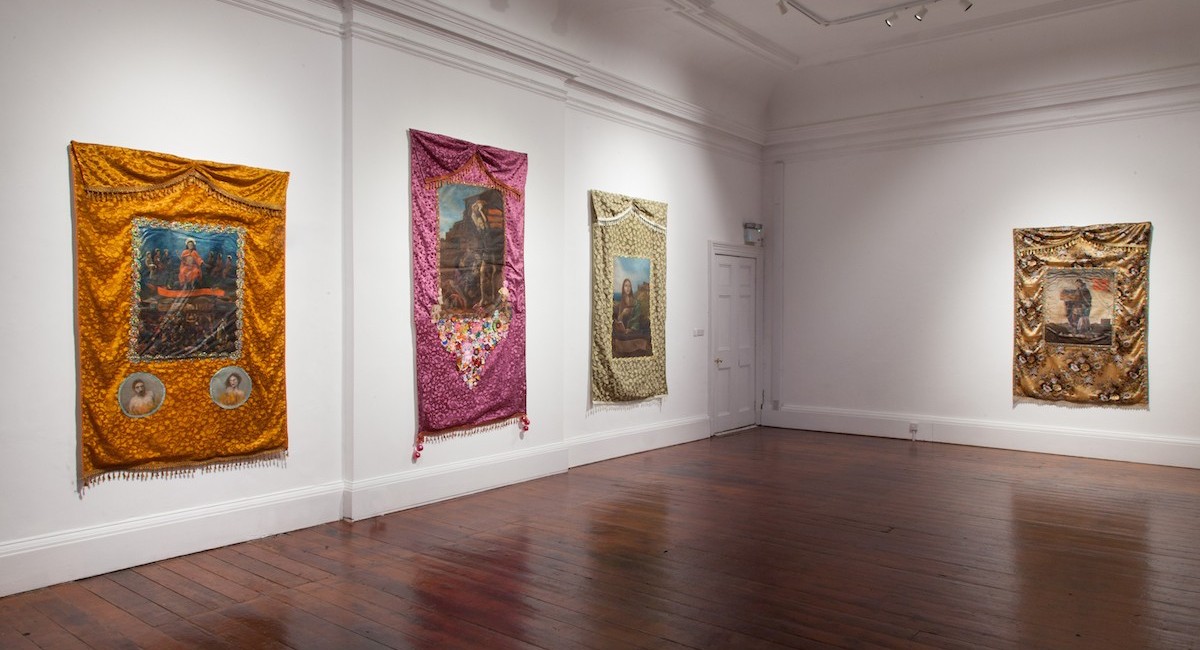 Daniela Ortiz, They Will Burn with the Flame of the Mother’s Torment and in Ashes Transform 2021; installation view. Photograph: Brian Mac Domhnaill, SIRIUS

Daniela Ortiz, They Will Burn with the Flame of the Mother’s Torment and in Ashes Transform 2021; installation view. Photograph: Brian Mac Domhnaill, SIRIUS

The artist Daniela Ortiz’s exhibition They Will Burn with the Flame of the Mother’s Torment and in Ashes Transform features works concerned with racist and patriarchal attitudes and practices, both historical and contemporary. The core of the presentation is a commissioned, new series of banners informed by research conducted in Ireland and made in collaboration with Peruvian women of Indigenous origin (Peru is the artist’s native country).

Ortiz examines nationalism, class and gender divides, racism, and the construction of identity amid the legacies of colonialism and patriarchy. She specifically addresses morality codes, citizenship, and border control systems as enacted through the exclusion—and sometimes exploitation—of migrant communities, and racialized people more broadly. She is known for using her own lived experience as subject matter, for instance motherhood, displacement, feminist engagement, and the production of deviant and insurgent subjectivity.

Ortiz calls upon traditions and imagery from underrepresented groups, for instance Indigenous peoples from Latin America, to suggest alternatives to Eurocentric aesthetics. In line with this approach, recent projects have resulted in ceramic pieces, photographic series, and children’s books that embrace a storytelling approach, figurative style, craft-oriented media, and vernacular references, all of which twentieth-century Western art history, with its imperialist and conceptual mindset, has mostly dismissed or made invisible.

Ortiz’s new series of banners deals with misreadings and appropriations of biblical references that have subsequently led to the subjugation of women. In each piece, Ortiz relates a historical religious painting to contemporary challenges faced by mothers and children. She took her inspiration from stories of the Magdalene Laundries—the Catholic Church-led, workhouse-style operations that existed in Ireland from 1765 to 1996. These institutions were intended to house “fallen women” such as unmarried mothers, prostitutes, and young girls who had been abused but effectively imprisoned them, forcing their labor and isolating them from their communities. Ortiz’s enquiry led her to investigate state family policies—particularly custody laws authorizing the removal of children from their mothers—as well as other intellectual and sociological references, from religion to the Western pictorial tradition.

The title of these pieces (after which the exhibition is named)—They Will Burn with the Flame of the Mother’s Torment and in Ashes Transform—recalls the ancient custom of women being burned at the stake for sinning or witchery. It suggests that from the ashes of those who have suffered and died in institutions, from the flames of religious obscurantism, women will rise like phoenixes. The mother’s torment refers to the suffering of those whose children are forcibly removed—an action that is disproportionately applied to racialized mothers.

In one of the pieces, the Virgin Mary holds a representation of the ruins of a former Magdalene Laundry run by the Good Shepherd Sisters in Cork City and sets fire to the building – a reference to the fact that she herself would have been considered an adolescent with child and might well have been sent to one of these institutions if she had lived in this period. The child next to her holds a representation of a Catalonian agency that regularly removes children from their mothers. The organisation is likewise depicted as being on fire. The nameless heads depict the authorities who impose forced adoption, and are intended to reference in turn the unmarked mass graves of children and women that have been connected to the Magdalene Laundries in Ireland. In the background is a depiction of Kinsale Road Accommodation Centre in Cork City, one of the controversial temporary housing structures that hosts people seeking asylum in Ireland while their status is being assessed by the government. That image relates to the lack of autonomy among mothers and children in such places, through factors such as not being allowed to work, or, at the most basic level, not being able to choose what they eat.

Other works in the exhibition include The ABC of Racist Europe (2017), which manifests the exhibition’s themes through the lenses of European Union migration control policies. Ortiz made this work in collaboration with local single mothers from refugee backgrounds. The group decided how to illustrate the issues that have affected their lived experience in England in the context of their asylum-seeking process, especially their concerns for their children. The work is a series of prints originally conceived and produced as a children’s book responding to nineteenth-century racist pedagogies. A classic example is An ABC for Baby Patriots by Mrs. Ernest Ames, an 1899 children’s book whose images and blurbs demonstrate the imperialist and xenophobic values of Victorian Britain. Ortiz rewrote An ABC for Baby Patriots against its colonialist and white supremacist ideologies. She suggests that many of the same prejudices exist now as when Ames’s children’s book was published more than a century ago. The artist reveals this type of children’s books as not only a tool for learning but also a means of instilling racist and patriarchal ideals among the young, contributing to the biased Western imagination of the “other” that still prevails today.

Ortiz finds art useful for her political investigations. She is not only alert to narratives of oppression but also collaborates with others through activism, bringing practices of emancipation into effect. Her key projects explore questions of struggle against mechanisms of power, including patriarchy and white supremacy, often focusing on the ideological apparatuses by which government agencies and corporate interests collude to manage systems of immigrant surveillance, detention, and deportation. All of the featured works in this exhibition relate to spirituality, iconography, and knowledge through which the artist sheds light on human belief systems outside of the Western mindset, as well as persistent social injustices across the globe.