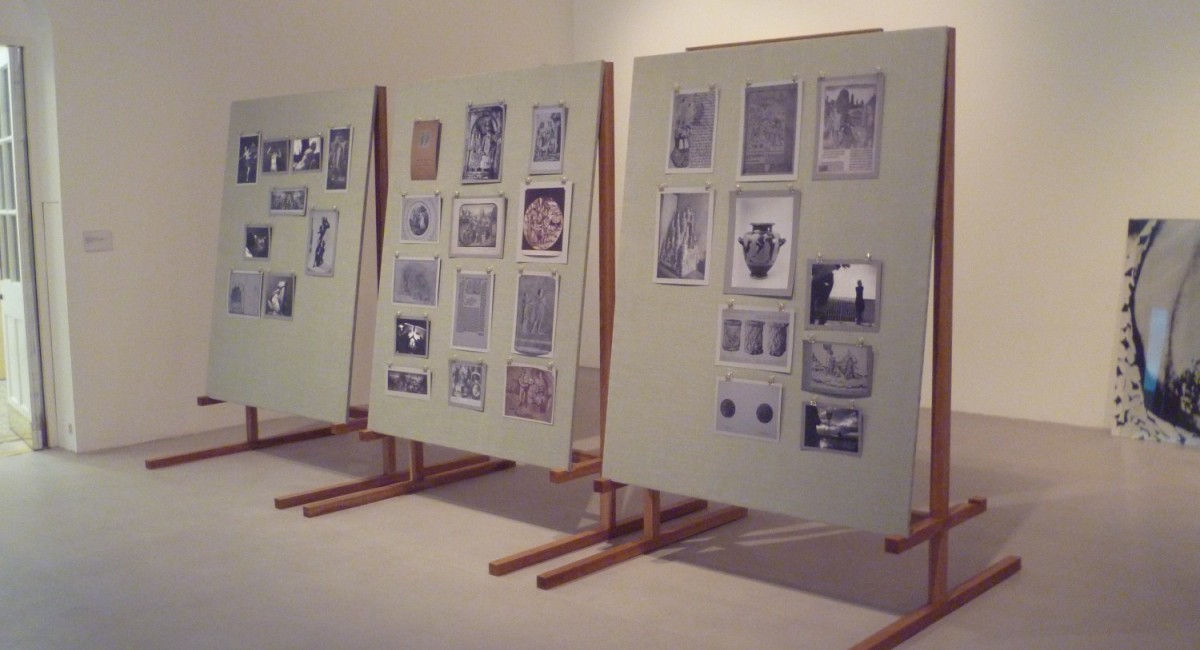 The Man Who Looked Back installation shot, courtesy of Jeremy Millar

The Other Dark: Tacita Dean, Jeremy Millar and Nashashibi/Skaer : Curated by Kirstie North

The Man Who Looked Back installation shot, courtesy of Jeremy Millar

This exhibition brings together a number of art historical works by Tacita Dean, Jeremy Millar and Nashashibi/ Skaer (Rosalind Nashashibi and Lucy Skaer). Each of these works revisits, restages, or refers to a celebrated moment in art history by recalling older works by Robert Smithson, Albrecht Dürer, Aby Warburg, and Paul Nash. The exhibition introduces what the curator Kirstie North has called a new ‘art historical turn’ operating in contemporary art practice, drawing from her PhD thesis on this theme completed in 2016.  This research argued that the recent revival of interest in art historical representation, combined with a preference for analogue mediums, is symptomatic of a problematic relationship with digital technology — especially as it relates to memory, art historical memory, and artists’ mediums. In various ways each work in the exhibition deals with loss and lost time through absent art objects, almost obsolete mediums, and outmoded methods of display.

Trying to Find the Spiral Jetty, 1997
By Tacita Dean

In New York, someone mentioned that the Spiral Jetty had risen, and that was enough to set me off on a journey to try and find it. Although it prefigured in my imagination as a black and white slide projected on an art school wall, it became an icon for me that summer; a virtual reference that beckoned me away from the unfamiliar but exhilarating world of the Sundance Screenwriting Lab. I set off with directions from the Utah Arts Council and a friend from the Lab. We took the i-80 north from Salt Lake City. He had no idea what we were looking for.

The journey to Rozel Point, more than any journey I can consciously remember taking, led me back into my imagination. I feel I often go there: to the primeval hill formation and the thick red lake, where all the vegetation is covered with a ¼ inch of salt and where the air at dusk is so full of mosquitoes that they sound like rainfall hitting the car windscreen. It has become a place of time travel, of prehistory and the future, of the sedimentation of thinking and the very matter and fabric of film.

Robert Smithson has become an important figure in my working life, not because I depend on him in any way, but because his work allows me a conceptual space where I can often reside. Artists don’t talk about this very much, because it is hellishly difficult to describe. It’s like an incredible excitement and attraction across time; a personal repartee with another’s thinking and energy communicated through their work. Looking for the Partially Buried Woodshed was about visiting one of Smithson’s delegated places; one of his crosses on the map. Personally, I don’t believe the woodshed is where Kent State University say that it is. I believe it is beneath the tarmac in the car park where you leave your car in order to approach the wooded mound described as ‘Earth Sculpture’ on the campus map.

Contrary to current mythology, Smithson didn’t want his works to disappear. In fact they are talking about rebuilding up the Spiral Jetty so you can walk along it. So it will have risen again, no longer submerged in some prehistorical state in the Rozel Point of my imagination.

Jeremy Millar, The Man Who Looked Back, 2010

The Man who Looked Back is based upon the Mnemosyne Atlas, 1924-29, the vast document of cultural memory created by the German art historian, Aby Warburg. It continues Millar’s ongoing engagement with the work of Warburg who was interested in ‘looking back’, and in the recurrence of certain forms, such as physical gestures.  The Man who Looked Back presents a number of images from the Warburg Institute’s photographic library, all relating to the myth of Orpheus and Eurydice, a story in which ‘looking back’ is tragic rather than contemplative. Alongside these images Millar has placed stills taken from Chris Marker's 1963 film La Jetée which, as he has suggested, might also be considered a contemporary version of the Orpheus myth.

The Melancholy Mobile is somewhat reminiscent of the American artist Alexander Calder’s floating and balancing forms, although here Millar replaces Calder’s two-dimensional floating shapes with three-dimensional ‘Dürer Solids’ — the mysterious polyhedron that appears prominently in Albrecht Dürer’s famous 1514 engraving Melancholia I. Made of dark, lustrous material, the forms do not suggest the playfulness normally associated with mobiles. Rather, they recall the depression from which Warburg suffered throughout his life, and the ‘Saturnine’ character which many artists are said to posses. Here melancholy is presented as an ongoing process of balance, something which allows the making of a certain beauty, and grace, but which requires care and attention, also. Warburg saw Dürer’s etching as a ‘consoling, humanistic message of liberation from the fear of Saturn’ and considered the brooding female figure as ‘a thinking, working human being’, her access to spiritual and intellectual capacity giving her a way out of depression.

Our Magnolia is a single channel 16mm film that takes British surrealist Paul Nash’s painting Flight of the Magnolia, 1944 as a starting point. Nash’s painting was created when the threat of a German invasion embued the English sky with a new anxiety. In his 1946 essay Aerial Flowers, Nash writes ‘ever since the Spanish war the idea of the rose of death, the name the Spaniards gave to the parachute, had haunted my mind so that when war overtook us I strained my eyes always to see that dreadful miracle of the sky blossoming with these floating flowers’. Our Magnolia places Nash’s painting in new contexts, including Thatcherism and the Iraq War. This new imagery resonates with Nash’s practice as he was official war artist for the British during World War I and II.

Kirstie North is an art historian and independent curator who currently teaches in the history of art department at UCC. She has published writing on Tacita Dean, Jeremy Millar, Aby Warburg and Sean Lynch.

Tacita Dean is an English artist who lives and works in Berlin. Primarily working in film, she was nominated for the Turner Prize in 1998 and was awarded the Unilever commission for Tate Modern’s Turbine Hall in 2011.

Jeremy Millar is an artist based in London and Ramsgate, and senior tutor in Critical Practice, and Critical Writing in Art and Design, at the Royal College of Art, London. Millar has published widely on contemporary art and curated numerous national and international exhibitions.

In Association with LUX.
Kindly supported by Cork County Council and History of Art, UCC.
With thanks to Tacita Dean and Frith Street Gallery, London, Jeremy Millar, Rosalind
Nashashibi and Lucy Skear.